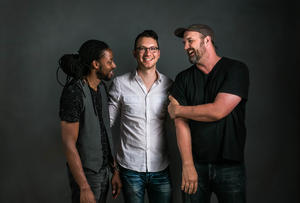 Part virtuoso and part storyteller, you might say that Jacob Johnson does with a guitar what Gene Kelly did with dance. Although his songwriting has won awards and his guitar-playing has put him on stage with such giants of the instrument as Tommy Emmanuel and Phil Keaggy, his ability as an entertainer is what has won fans from coast to coast. Joined by drummer John Henry (Atlanta GA) and bassist Mark Eshenbaugh (Taylors, SC), the Jacob Johnson Group puts on a show that is musically adventurous, but always high-energy and engaging for all ages.